Bat Cave is the largest cave in the park. Open only in the summer, it is home to an estimated 40,000 Indiana bats that hibernate there in the winter. The cave’s central passageway is a half-mile long and generally follows the course of Cave Branch. Cascade Cave is noted for its large chambers, unique cave formations, a 30-foot-high underground waterfall, a reflecting pool, and a former dance pavilion. Saltpetre Cave, a dry cave, is named for a former saltpeter works near the entrance that helped produce gunpowder during the War of 1812. Nitrates for making gunpowder could be extracted from the earth in caves. X Cave, the most popular cave for visitors, is named for two intersecting caverns that form the letter X.

Laurel Cave, which formed along a vertical joint, is located alongside Cave Branch and is open during the summer. Further upstream is Horn Hollow Cave which is open year-round. Both Laurel and Horn Hollow are undeveloped and require a free permit to explore.

A short hike from the welcome center is Carter Caves Natural Bridge, a waterfall arch nearly 300 feet long, 50 feet high, and 51 feet long along Cave Branch. It is the only natural bridge in the Commonwealth with a paved road on top. Fern Bridge, another waterfall arch, is much slimmer but taller in profile and is 110 feet high and 45 feet long. Closer to Cleveland Lodge is Raven Arch, a delicately balanced sandstone alcove arch that is 20 feet high and 30 feet long, and Smoky Natural Bridge, a waterfall arch that is 50 feet high and 42 feet wide. The latter is considered to be one of the largest in the state. Shangra La Arch is the smallest in the park, with a height of seven feet and a span of 11 feet along the Carter Caves Cross Country Trail. Further out by Cascade Cave and Box Canyon is Cascade Natural Bridge, a sandstone arch that is 30 feet high with a span of 44 feet. The alcove was formed by the gradual dissolving of limestone from under the sandstone.

The park also features nearly 30 miles of easy to strenuous hiking trails, a ten-mile hiking and horseback trail, horseback riding, fishing along the serene Smoky Lake, a lodge, cottages, a shaded campground, and a restaurant.

Various individuals owned the park for almost 200 years until the last private family owners, the J.F. Lewis family, and other private investors, including local Rotary Clubs, donated 945 acres to the Commonwealth of Kentucky in 1946. Cascade Caves were added to the park in 1959. In 1981, 146 acres of the park were designated as the Bat Cave, and Cascade Caverns State Nature Preserves to protect the Indiana bat, mountain maple, and Canada yew, all endangered species.

Smoky Bridge, one of several arches at Carter Caves

The Box Canyon Trail is a strenuous mile-long loop that passes by Cascade Natural Bridge and through Box Canyon.

The half-mile Natural Bridge Trail connects the welcome center to one of the most impressive natural bridges in the state.

The Three Bridges Trail is a 3.6-mile hiking path that highlights three of the park's natural arches, including Smoky Natural Bridge, Raven Bridge, and Fern Bridge. 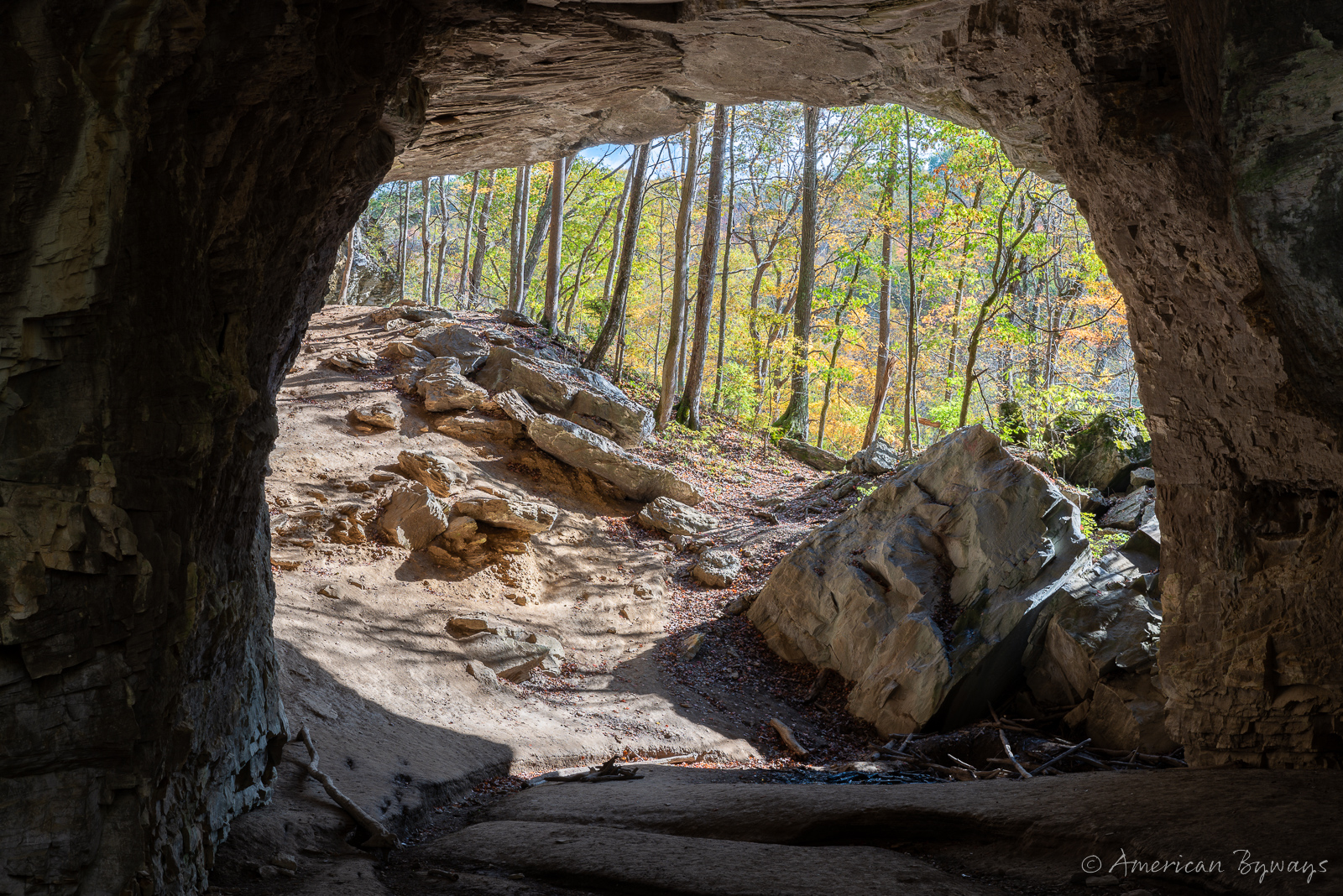