The historic Assateague Lighthouse is located at the southern end of Assateague Island within the Chincoteague National Wildlife Refuge along the coast of Virginia’s eastern shore.

Originally, no light existed between Cape Henlopen, Delaware, where a lighthouse marked the entrance to Delaware Bay, and Cape Charles, Virginia, where a lighthouse marked the northern entrance to the Chesapeake Bay. Because of shipwrecks that piled up on the many shoals that plagued the coasts of Delaware and Virginia, the United States Congress appropriated $7,500 for a lighthouse on one of the Chincoteague Islands which would place the light between the Delaware Bay and the Chesapeake Bay in March 1831. In 1832, Conway Whittle, the Customs Collector in Norfolk, selected a site on Assateague Island and purchased a 50-acre site on May 4.

Noah Porter, who had earlier built the Ocracoke Lighthouse in 1823, was selected for constructing a 45-foot-tall brick tower and residence after having submitted the lowest bid. Work started in August 1832 and the new lighthouse was supposed to be finished by January 1833, but improper planning and insufficient quantities of brick delayed its opening. Finally, David Watson lit Assateague Lighthouse eleven oil lamps set in 14-inch reflectors for the first time in the spring.

By 1850, the lighthouse was in disrepair, with bricks falling out of the structure and the building needing whitewashing. Additionally, the silver was being worn off of the reflectors in the lantern room. A third-order Fresnel lens replaced the antiquated lamps and reflectors in 1856, but the entire facility was declared ineffective in 1858 because the light could still not be seen beyond the dangerous Black Fish and Winter Quarter shoals 14 miles from shore. Facing these issues, the Lighthouse Board requested funds for a 150-foot-tall lighthouse.

Congress allocated $50,000 for the project in June 1860 but little progress was made before the Civil War stopped all work. When work resumed in 1865, the Lighthouse Board realized that additional funds were needed because of a sharp increase in the price of materials and labor. An additional $25,000 was allocated by Congress in July 1866.

The new 142-foot-tall Assateague Lighthouse, with a first-order Bariber & Fenestre Fresnel lens, was placed into operation on October 1, 1867.

The facility was extensively renovated in October 2013 at the cost of $1.5 million. Work included replacing the lower gallery deck, the removal and replacement of glass, the restoration of the widow’s walk, and the painting of the exterior.

From Chincoteague, follow Maddox Blvd. southeast for 1.7 miles to the crossing over the Assateague Channel. The roadway leads into the Chincoteague National Wildlife Refuge. Park at the Lighthouse Trail parking area. 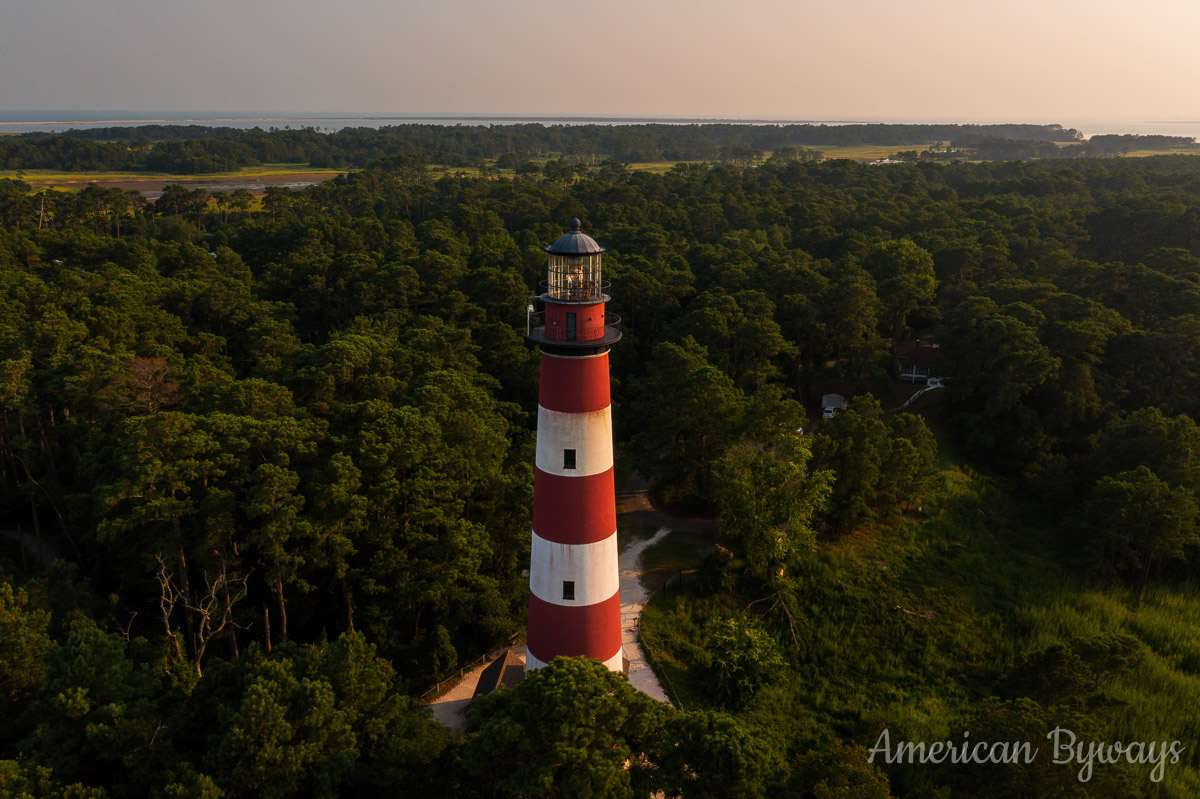