Hocking Hills is located within the Wayne National Forest in southeast Ohio and includes Hocking Hills State Park and several nature preserves. The topography of the region is dominated by Blackhand sandstone and shale, having been deposited more than 350 years ago when most of Ohio was nothing more than a shallow sea. Uplift and erosion over the years led to the creation of several caves, cliffs, rock shelters, and waterfalls.

The area was a well-known scenic attraction by the 1870s, and in 1924, the first land purchase by the state, totaling 146 acres at Old Man’s Cave, was made to preserve the aesthetics of the Hocking Hills region. The park became further developed when a dining lodge and cottages were opened in 1972.

Cedar Falls is a 50-foot horsetail waterfall along Queer Creek.

Hidden Falls is a 15-foot-high waterfall that is tucked behind a large boulder, making it ``hidden`` from view. It is near Cedar Falls.

There are 12.5 miles of maintained trails at Hocking Hills State Park. Most of the trails are short in length, and several have been combined to form loops.

Ash Cave is the largest recessed cave in the state and is accessible through a narrow gorge that is filled with towering hemlocks and other hardwoods. The cave measures 700 feet wide and 100 feet deep and features a 100-foot waterfall along the East Fork of Queer Creek. It is named after huge piles of ash measuring 100 feet long, 30 feet wide and three feet deep were discovered under the overhang, created possibly from Native American campfires or smelters.

Also along Queer Creek is Cedar Falls, the largest waterfall at Hocking Hills by volume. It was in the mid-1850s that a mill was constructed above the 50-foot-high horsetail waterfall and that the area was named after the stately hemlock trees—mistaken for cedars.

Nearby is Hidden Falls, a 15-foot-high waterfall that is tucked behind a large boulder, making it “hidden” from view.

Cantwell Cliffs is more isolated than the other features of Hocking Hills due to its location, but along Buck Run are deep rock shelters, impressive cliffs, and a sheltered valley. The Rim Trail offers great vistas while the valley trail offers upward views of the cliff and creek valley.

Similar in nature is Conkles Hollow, which features a deep and rugged gorge with cliffs that soar 200 feet into the air. Hardwoods and hemlock compete for space along the rim while ferns, wildflowers and a dense collection of trees all but crowd out the sunlight that filters down onto the valley floor, which is only 100 feet wide in places. Conkles Hollow, a State Nature Preserve, is named after German immigrant, W.J. Conkle, who carved his initials into the rock in 1797.

Old Man’s Cave is by far the most visited area of Hocking Hills and includes the Devil’s Bathtub, Upper Falls, Middle Falls, Lower Falls, and a winding half-mile gorge carved out of Blackhand sandstone. A complex network of trails cuts through, paralleling the rims on both the north and south side and one through the gorge itself. It was named for the rock shelter that was home to Richard Rowe, a 19th-century hermit who is said to be buried beneath a cave ledge nearby.

Rock Cave is the only cave in Hocking Hills, and is located 150-feet up a blackhand sandstone cliff. Featuring natural cuts that resemble windows, Rock Cave was used by Native Americans for turpentine stills and shelter. 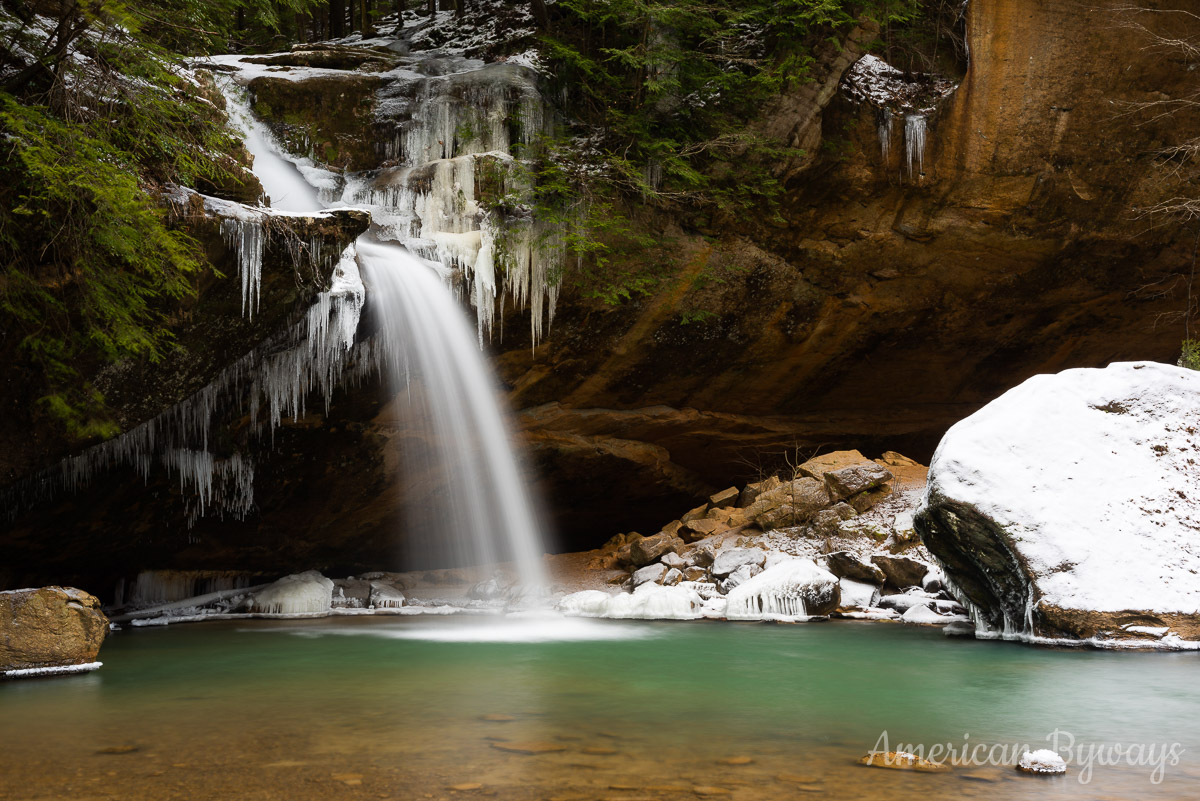