Castle Hill Lighthouse is a historic lighthouse along the shores of the East Passage of Narragansett Bay in Rhode Island.

The Lighthouse Board first requested to construct a navigational aid on Castle Hill in 1869 to assist in the guidance of vessels, especially in inclement weather, into Newport Harbor and Narragansett Bay. It was estimated that a lighthouse would cost $18,000. The request was canceled in 1871 and it was instead recommended that a steam fog signal be built at Beaver Tail Lighthouse about two miles west.

The Lighthouse Board changed its recommendation once again to favor a light at Castle Hill, and in 1875, Congress approved a $10,000 request for a fog signal. Unfortunately, summer cottages had just been constructed nearby and the landowner refused to sell, fearing that a fog signal would depreciate the value of the land. Condemnation proceedings were considered but the valuation of the land would have most likely exceeded the amount of the appropriation. After two years of failed negotiations, the Lighthouse Board considered installing a whistle buoy but its effectiveness was in doubt and the device was never installed.

The Lighthouse Board was finally able to secure land to build a fog signal and keeper’s dwelling from the famous naturalist Alexander Agassiz who sold the land for one dollar. Construction was delayed when Agassiz refused to grant contractor William T. Wilbur access to the site through his property. It took nearly two years of negotiations before Agassiz relented and deeded a near two-acre right-of-way.

The new Castle Hill Lighthouse began operations on May 1, 1890. Designed by Henry Richardson and constructed of granite block, the light stood 34-feet in height and featured a kerosene-powered fifth-order Fresnel lens that flashed a red light. The keeper’s house had six rooms and an attached kitchen.

Objections over noise by Agassiz led to the discontinuance of the fog bell in November 1891. On February 27, 1896, Aa new 1,286-pound fog bell was installed in February 1896 and later upgraded with a 2,400-pound fog bell. A wall was added to deflect sound away from Agassiz’s residence.

In 1899, a new fifth-order Fresnel lens was installed and the upper half of the lighthouse was painted white to make the building more visible to vessels. A modern 300-mm plastic lens replaced the Fresnel lens when the station was automated in 1957.

Although the Castle Hill Lighthouse is not open to the public, the grounds are accessible from footpaths in the area. The fog bell used at the light is stored at the coast guard station in Castle Hill Cove. 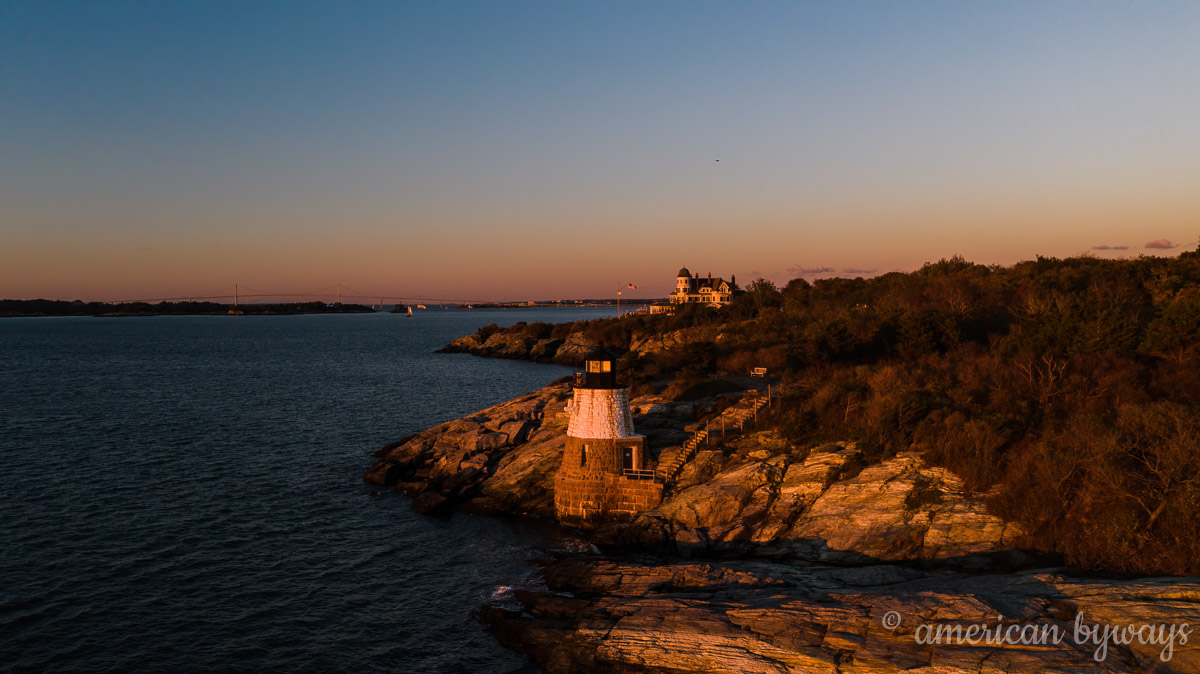