Fort Conti, the first fortification at the mouth of the Niagara River, was constructed by René-Robert Cavelier in 1678. It was replaced in 1687 with Fort Denonville which was abandoned by September 1688 because of the area’s harsh weather conditions and disease.

In 1720, Louis-Thomas Chabert de Joncaire was dispatched to the Senecas to obtain permission to build a French post on the banks of the river. After receiving approval, Joncaire and eight men dispatched from Fort Frontenac built a trading post on the grounds of Fort Denonville that traded good for furs. In 1726, a two-story Maison a Machicoulis was erected on the same site by French engineer Gaspard-Joseph Chaussegros de Léry. The fort was expanded to its present size in 1766 because of increased tensions between French and British colonial interests, becoming Fort Niagara.

The fort played a significant role in the French and Indian War, and it fell to the British during the Battle of Fort Niagara, a 19-day siege in July 1759. The French relief force sent for the besieged garrison was ambushed at the Battle of La Belle-Famille, and the commander of the post surrendered the fort to the British commander, Sir William Johnson. Fort Niagara remained in British hands until it was ceded to the United States after the Treaty of Paris was signed, ending the American War of Independence in 1783. The region effectively remained under British control until the Jay Treaty was signed in 1796.

During the War of 1812, the fort’s guns sank the Provincial Marine schooner Seneca. In retaliation for the burning of Newark, British forces captured Fort Niagara on the night of December 19, 1813. The British held the fort for the remainder of the war until they relinquished it under the terms of the Treaty of Ghent.

Following the Civil War, the military abandoned the use of masonry forts as they fared poorly under bombardment. A newer installation was constructed just south along the Niagara River which contained a thousand-yard rifle range, railroad access, and modern facilities. Fort Niagara trained troops for the Spanish-American War and World War I, and during World War II, it served as an induction center and as a Prisoner of War camp for 1,200 German soldiers captured in North Africa. After World War II, the fort served as temporary housing for returning veterans, and during the Korean War, it was a headquarters for anti-aircraft artillery and Nike missiles.

In 1931, nine years of lobbying by local citizens for repairs and preservation led to the development of the Old Fort Niagara Association, and the fort was among the first sites designated as a National Historic Landmark in 1960. Today, the original fortifications have been renovated to serve as the centerpiece of the Fort Niagara State Park. The restored fort features a museum and plays host to numerous historical reenactments of 18th-century battles and events.

From Interstate 190 in Lewiston, follow the Niagara Scenic Parkway north for 8.8 miles. Take the exit for Fort Niagara and continue west for 1 mile to the parking area for Fort Niagara.

The original Gate of Five Nations, comprised of a gatehouse, drawbridge, and trestle, was erected by the French in 1756 and was named in honor of the Five Nations of the Haudenosaunee Confederacy. The original wood gatehouse was closed c. 1805 and rebuilt from stone in 1930.

The Hot Shot Furnace, a coal-fired oven, was added in 1843 to heat cannon balls red hot. When fired at a wooden ship, the projectile would set the target afire.

The French Castle was built by the French in 1726-27 and was designed to house up to 60 soldiers. The Castle, called La Maison a Machicoulis by the French, incorporated barracks space for soldiers, officers quarters, a trade room. chapel, storerooms, powder magazine, and bakery.

The Bake House, adjacent to the French Castle, was built in the 1740s by the French. It was rebuilt in 1762 after a fire destroyed the building in the proceeding year. 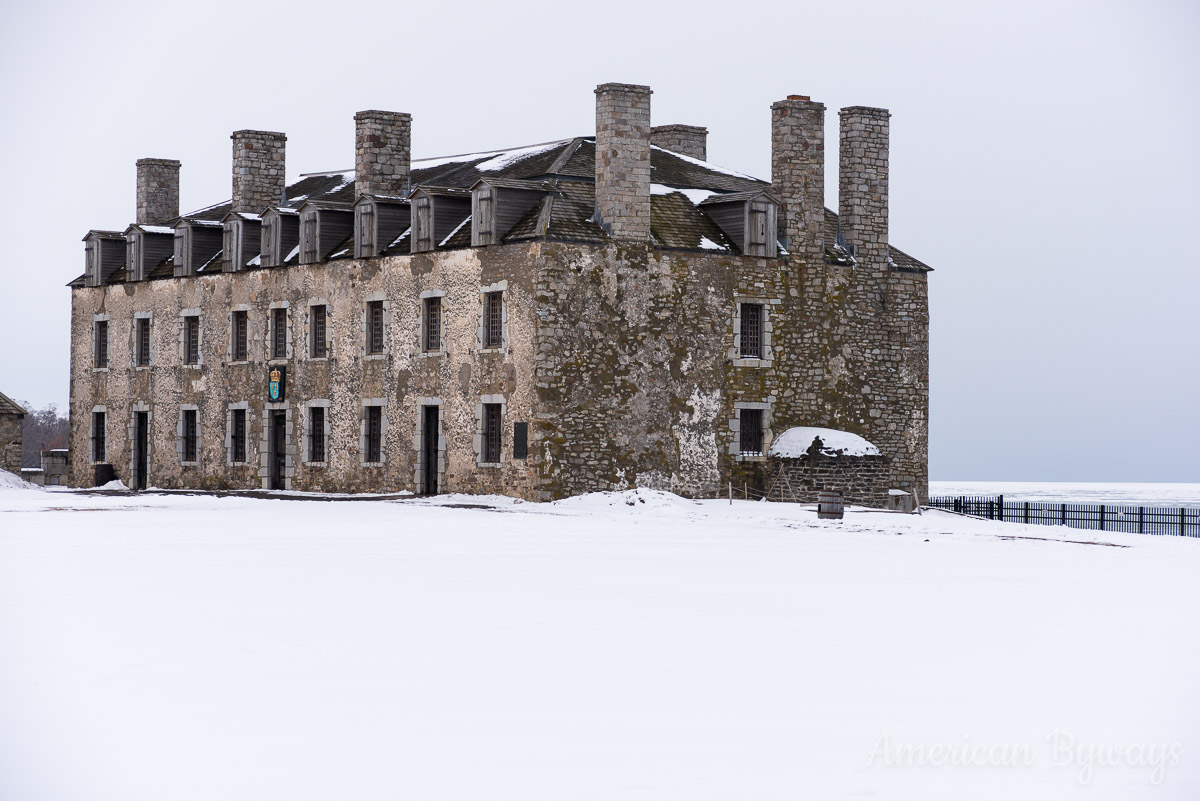