Nuttallburg, located along the New River in Fayette County, West Virginia, was a coal mining venture that was spawned out of England-born entrepreneur John Nuttall. It is notable for its restored tipple and disused coke ovens.

In 1870, John Nuttall began acquiring coal-rich land along Keeneys Creek and New River in West Virginia at the price of $1 per acre in anticipation of the completion of the Chesapeake & Ohio Railway (C&O) from Richmond, Virginia west. Nuttall formed the Nuttallburg Smokeless Fuel Company and started a company town along the New River.

The No. 1 mine, opened in 1870, was at the confluence of Kenneys Creek and New River, followed by the No. 2 mine in 1874 along Short Creek. When the C&O was completed through the area in 1873, Nuttallburg became the second mining town in the region to ship “smokeless” coal to eastern markets. In 1882, Nuttall formed the Nuttallburg Coal & Coke Company with equal partnerships divided among his sons, son-in-law Jackson Taylor, and mine boss William Holland.

A conveyor, a twin “monitor,” or a cylindrical tube with a door at one end, connected the tipple to the mine. Coal was fed to 80 coke ovens, which converted coal into high carbon coke that was used in pig-iron blast furnaces. The coke was produced by baking coal under a regulated flow of air. Near the ovens were scales, a headhouse, a blacksmith shop, a carpentry shop, and a slate dump.

By 1893, Nuttallburg had grown to house 300 residents and featured 17 two-family and 80 single-family company-owned homes.

The coke ovens were idled circa 1919 after more modern facilities that could recover byproducts from coke production were opened closer to steel mills.

The Ford Motor Company attempted vertical integration efforts in the late 1910s and early 1920s. Ford desired control of all aspects of production, from the sourcing of raw materials to the manufacture of the finished automobile. Ford, through the Fordson Coal Company, acquired the mining rights of Nuttallburg Smokeless Fuel to secure a stable coal supply for Ford’s steel mills in Dearborn, Michigan. Coal from Nuttallburg was shipped via the C&O and the Ford-owned Detroit, Toledo & Ironton Railroad. Fordson, operated by Henry Ford’s son, Edsel, invested heavily into Nuttallburg.

A new tipple was built in 1923-24 and a new conveyor was added in 1925-26. The larger tipple consisted of three tracks that served the C&O. The inner track was for fine coal, the middle track was for intermediate coal, and the outside track was for larger lump coal. A house coal hopper was located nearby for the town’s residents who used the fuel for cooking and heating. The headhouse, located at the entrance to the mine above the town along a mine bench, was rebuilt in 1925-26.

Loaded coal cars left the mine and entered the headhouse where the cars were weighed. Miners were paid based on the weight of coal they mined. Afterward, the coal was dumped and transferred to a 1,385-foot-long “button-and-rope” conveyor. An electric motor started the conveyor, but the weight of the coal pulled downward by gravity and governed by sprockets and gears, provided power afterward. A heavy wire “rope” with iron disc “buttons” spaced at four-foot intervals moved coal at 80 feet per minute and could process 125 tons of coal per hour. The innovative “button-and-rope” conveyor also reduced the fragmentation of the coal. Additionally, manual pick ax mining operations were replaced with four mining machines that employed just 49 men but were much more efficient.

The vertical integration experiment, however, began to unravel when Ford could not control or purchase the railroad. Ford sold their interests in the Nuttallburg mines in mid-1928 to the Maryland New River Coal Company.

In the 1930s, additional worker housing was built at “Seldom Seen” at the northwest corner of Nuttallburg. A new fan house was built circa 1950. followed by a steel and timber Belknap Chloride Washer for washing coal on the west side of the tipple in 1952. In 1954, the mine was sold to the Garnet Coal Company and coal mining ceased at Nuttallburg in 1958.

The Nuttall family transferred ownership of Nuttallburg to the National Park Service (NPS) for inclusion in the New River Gorge National River in 1998. The town and its mining structures were inventoried and documented in 2005 and thereafter listed on the National Register of Historic Places. The NPS then completed a multi-year project that included stabilizing or rebuilding existing mining structures. Today, Nuttallburg is regarded as one of the most intact examples of traditional coal mining in West Virginia.

From US Routes 19 and 60 at Hico, follow US Route 60 east for 4.2 miles. Turn right onto Lansing-Edmond Road (County Route 82) and follow for 2.1 miles. Continue onto Kenneys Creek Road and continue for 4 miles. A significant amount of this route is one lane and may not be accessible to low-clearance vehicles. 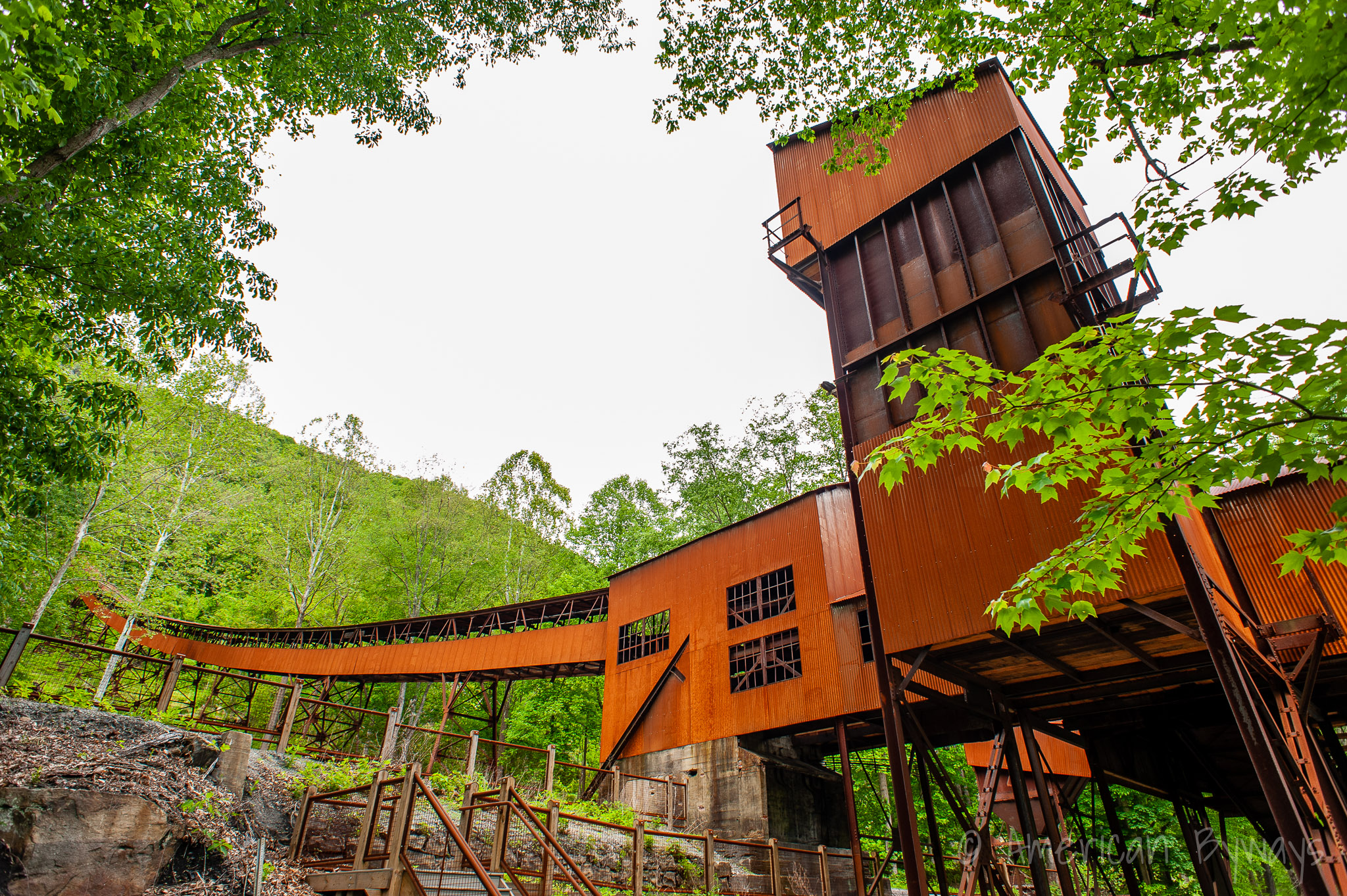