Named for the 15 miles of colorful sandstone cliffs northeast of Munising, Pictured Rocks extends for 42 miles along the shores of Lake Superior. Reaching up to 200 feet above the lake, the cliffs have been sculpted into arches, caves, and formations. The preserve also features numerous unique sand dunes and picturesque waterfalls.

The unique colors that bathe the sandstone in hues of red, yellow, brown, and green come from groundwater leaching out of the rock and evaporating, leaving behind streaks of copper, iron, limonite, manganese, and other minerals.

Much like the artists who embodied the Romantic Hudson River School art movement in the 19th century, a series of American writers described their experiences upon reaching Pictured Rocks. Geologist Henry Schoolcraft remarked upon “some of the most sublime and commanding views in nature,” while fur trader Pierre Espirit Radisson noted that “nature has made it pleasant to the eye, the spirit, and the belly.”

Chapel Falls is a 60-foot high cascade along Section Creek.

Often overlooked is the wide 10-foot-high Chapel Beach Falls at the terminus of Section Creek at Lake Superior.

Miners Falls is a 40-foot-high cascade along Miners River.

Mosquito Falls is a wide 10-foot-high waterfall along Mosquito Creek.

Munising Falls is a 50-foot-high sheer drop along Munising Creek in the city of Munising.

Sable Falls is a 75-foot-high cascade along Sable Creek.

Pictured Rocks offers nearly 100 miles of easy to strenuous trails through miles of pristine beaches, alongside soaring cliffs, and through dense woodlands.

Accessing Munising Falls is easy via a paved .2-mile paved wheelchair-accessible trail through a shaded sandstone canyon along Munising Creek to a viewing platform. Two sets of stairs lead to other viewing points.

The Sable Falls Trail is a ½-mile in-and-out trail from a parking area to the base of Sable Falls via 168 steps. The trail continues north to a rocky beach along Lake Superior.

The Sand Point Marsh Trail, an easy ½-mile atop a wheelchair-accessible boardwalk, encircles one of the park's most beautiful wetlands, winding through a cattail marsh, a white cedar and black spruce swamp, and through some small ponds. 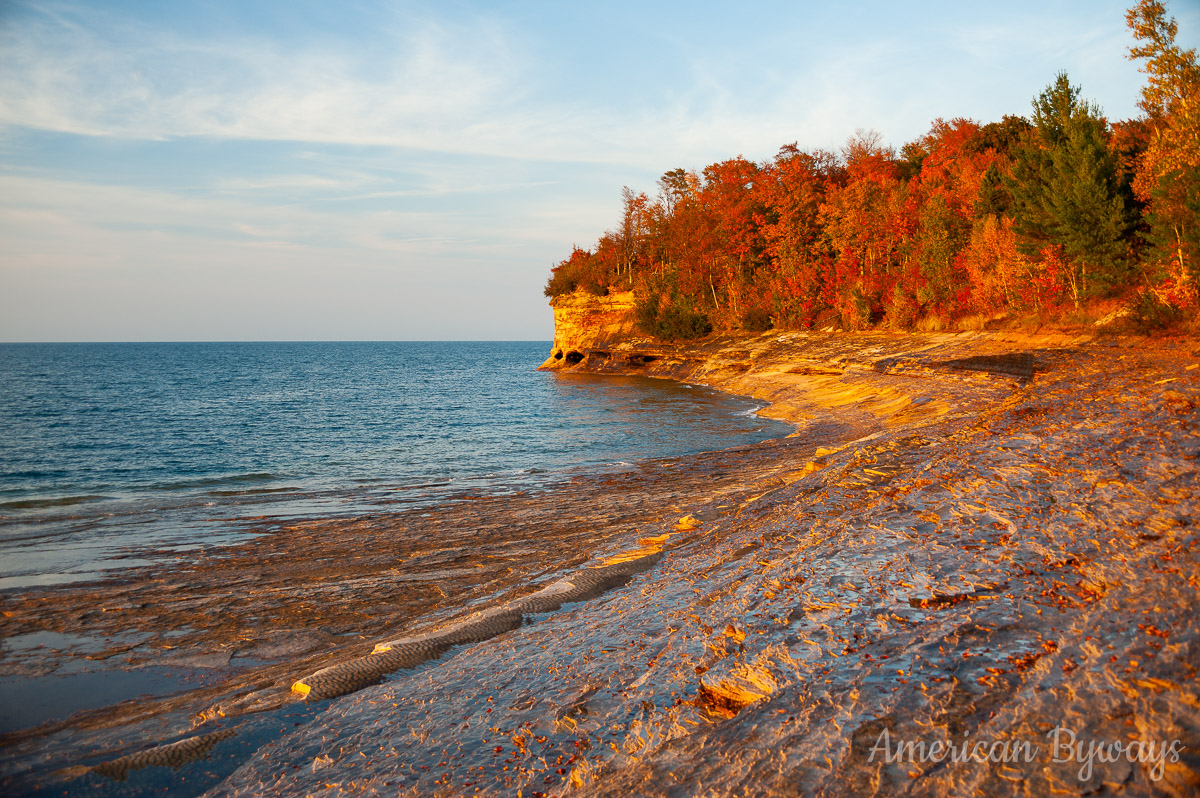