Red River Gorge’s famed sandstone arches formed over 70 million years ago by erosion. There is evidence that indigenous people lived in the gorge’s numerous rock shelters as early as the Paleoindian period. More recently, it is thought that Daniel Boone is thought to have explored the region, spending the winter of 1769-70 beneath a rock shelter.

The rock shelters, protected from precipitation and rich with nitrates, preserved plant materials and artifacts, such as leather moccasins and woven mats. The shelters at Red River Gorge have yielded some of the earliest evidence of the domestication of plants in the United States. It is unsurprising that there are 664 known prehistoric and historic sites that date from 11,000 years ago to the 20th century.

Red River Gorge features diverse biology, home to several endangered and rare species such as the Canada lily, Canadian yew, elderberry, Lucy Braun’s white snakeroot, mountain maple, purple-fringed orchid, and white-haired goldenrod. There are also 100 species of birds, including 18 species of warblers, and several species of endangered bats that use the cliff line as feeding routes.

There are countless miles of official, blazed trails at Red River Gorge, marked and maintained by the Forest Service that connects trailheads to arches, rock climbing routes, and waterfalls. There are also countless miles of unofficial trails. A detailed trail guide is not provided for this article as basic trail information is provided below within the gallery.

Princess Arch Trail is an easy ¼-mile paved trail that extends out along a wooded ridge through mixed hardwood and pine stands and rhododendron to the 32-foot-long Princess Arch.

Sky Bridge Trail, an easy .8-mile loop hike, crosses above and below the longest arch span at Red River Gorge.

Angel Windows is a double buttress-type arch that has been carved through the rock by wind and opens up into a small gorge. The largest arch is approximately 10-feet wide at its base. It is accessed from Trail 218, an easy .6-mile in-and-out hike that passes by several rock houses.

Creation Falls is a breathtaking 12-foot multi-tier cascade along Rock Bridge Fork. It is accessed from Trail 207, the Rock Bridge Trail, via a moderately strenuous 1¼-mile loop trail.

Nada Tunnel is a 900-foot tunnel that carries KY Route 77 under Tunnel Ridge. It was originally constructed for the Big Woods, Red River & Lombard Railroad in 1910 to access the virgin forests of the Red River valley.

Princess Arch is a 32-foot-long natural sandstone arch surrounded by mixed hardwood and pine stands and rhododendron. It is accessed from Trail 233, the Princess Arch Trail.

Rock Bridge is a natural sandstone arch that spans Swift Camp Creek. It is accessed from Trail 207, the Rock Bridge Trail, via a moderately strenuous 1¼-mile loop trail.

The lighthouse-style Sky Bridge Arch, at 90-feet wide, is the longest span at Red River Gorge and one of the longest in the eastern United States. A second span at Sky Bridge measures about 15-feet-wide. It is accessed from Trail 214, an easy .8-mile loop hike that crosses above and below Sky Bridge. 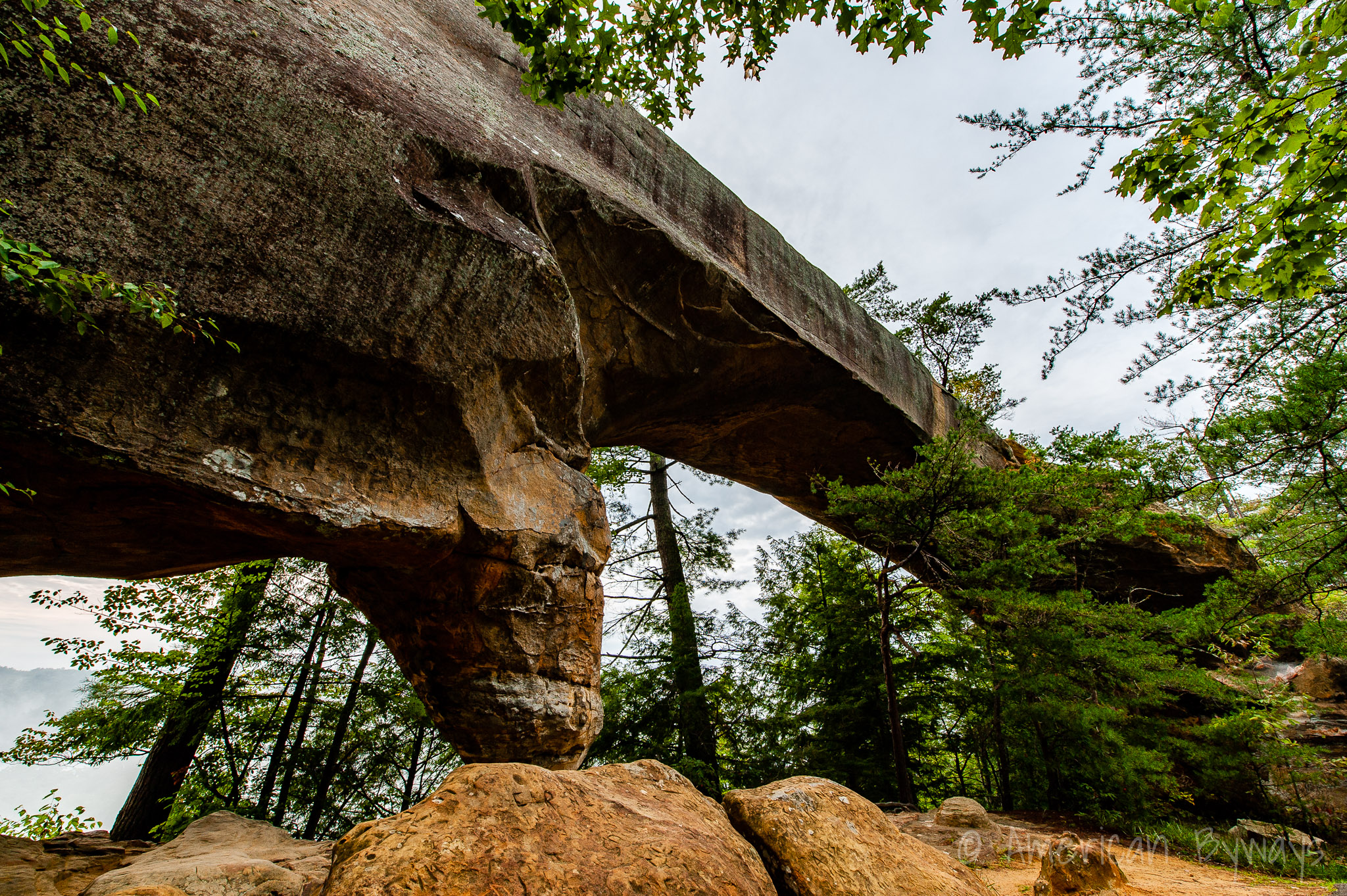