The Shaker Village of Pleasant Hill is the site of a Shaker religious community that was active between 1805 and 1910 in central Kentucky.

1
Explore Discover the Shaker Village story at your own pace through the Historic Centre with self-guided exploration aided by knowledgeable interpreters.
2
Weekend Programs Curated weekend events include traditional music on the lawn, family fun days, seed-to-table tours, and more.
3
Wander Hike 36 miles of trails along historic turnpikes, alongside quiet streams, and through mixed hardwood forests.
4
Boat Rides Enjoy a ride through high limestone cliffs in the Kentucky River's Palisades on the Dixie Belle riverboat.

The Shakers, formally known as the United Society of Believers in Christ’s Second Coming, are a Christian religious group that originated in Great Britain circa 1750. The first Shakers arrived in North America in 1774, and in 1805, a group had relocated to central Kentucky and established Pleasant Hill atop a knoll along the Kentucky River.

The Shakers, originally known as the Shaking Quakers because of their religious fervor in their services, believed in communal ownership of property, in the equality of race and sex, were opponents of marriage, and were proponents of celibacy.

Pleasant Hill peaked at nearly 600 residents in the 1820s, spread over 2,800 acres of farmland and 250 structures. The architecture at Pleasant Hill was strongly influenced by one individual, Micajah Burnett. Burnett, at age 17, and his parents arrived at Pleasant Hill in 1809, and by 1815, he was helping create village layouts. Using materials that were readily available, such as rock, clay, and wood, Burnett designed structures in the Federal style while remaining within architectural guidance prescribed by the Mount Lebanon ministry. The buildings focused on maximizing space and minimizing the need for supports, creating buildings with vast open spaces.

The Shaker community began to decline by the 1860s because of the advent of the American Civil War, changing social attitudes, and the advent of the Industrial Revolution. Additionally, as Shakers rejected sex as a sin, they had to rely on new converts to continue to exist which chose to be problematic as the 19th century trotted along.

The Pleasant Hill community dissolved in 1910, and the 12 remaining members deeded their last 1,800 acres to a local merchant who had agreed to care for them until their death. The last Shaker, Sister Mary Settles, died in 1923.

In 1961, a group of local citizens, led by local businessman Earl D. Wallace, formed the Shaker Village of Pleasant Hill, a non-profit, to begin the process of restoring the remaining buildings at Pleasant Hill. James Lowry Cogar, the first curator of Colonial Williamsburg, became the first president of the Shaker Village. Work to restore Pleasant Hill to its 19th-century appearance began in 1966, which involved restoring the buildings to their original appearances, burying utilities, and rerouting US Route 68 around the village. The Shaker Village is self-supported by its exhibitions, lodging accommodations, a restaurant, craft sales, and donations.

The Brethren’s Bath House, the only remaining example of many bathhouses that were constructed for each gender, was built in 1860.

The Centre Family Dwelling, constructed between 1824 and 1834, comprised of up to 100 members who lived as brothers and sisters on opposite sides of the building. The structure contained 14 bedrooms, kitchens, a dining room, a cellar with food storage areas, an infirmary, and a large meeting room.

The Pleasant Hill community was divided into five communal families, each with 50 to 100 members. Every family had its own dwelling house, shops, and related facilities.

The East Family Brethren’s Shop, erected in 1845, was used by the East Family as a woodworking shop where furniture and other wooden objects, including pegs, were made.

The East Family Dwelling was built in 1817 for the East Dwelling. The Pleasant Hill community was divided into five communal families, each with 50 to 100 members. Every family had its own dwelling house, shops, and related facilities.

The East Family Sisters’ Shop, erected in 1855, included provisions for sewing, spinning, and weaving with wool, cotton, silk, and flax fibers for the East Family. A looming house formerly stood in front of the Sisters’ Shop.

The mulberry trees outside of the Sisters’ Shop are remnants from the silkworms that were housed on the second floor. The sisters tended to hundreds of worms and cocoons from which they harvested silk thread.

The Farm Deacon’s Shop, constructed in 1809, was the first permanent structure at Pleasant Hill. It was used to house the ministry and the Centre Family, and later as a tavern for “wayfarers,” as a shop, and as a residence for the farm deacon.

The Meeting House, constructed in 1820, was the spiritual center of the Shaker community. It housed worship services on the first floor and apartments fo the Ministry on the second floor.

The Ministry’s Workshop, built in 1821, housed the residences and offices of the two men and two women who were the spiritual and administrative leaders of Pleasant Hill.

The Old Stone Shop, built in 1811, was most notably used as the medical office of Dr. William Pennebaker.

The Trustees’ Office, built in 1839, housed the legal and financial leaders of the local Shaker community. It also provided overnight accommodations to visitors.

The structure is notable for Micajah Burnett’s twin spiral staircases.

The Shakers dug out the spring at the tanyard and installed a force pump for the village waterworks in September 1832. The water was pumped by a horse five to six hours a day through 1½-miles of iron pipes to a water tank. The Water House, with brick insulation, was built to enclose the tank inf May 1833.

Water flowed from the tank by gravity to every kitchen, washhouse, and cellar.

The West Family Dwelling was constructed in 1821. The Pleasant Hill community was divided into five communal families, each with 50 to 100 members. Every family had its own dwelling house, shops, and related facilities.

The East Family Sisters’ Shop, erected in 1845, included provisions for sewing, spinning, and weaving with wool, cotton, silk, and flax fibers for the West Family. 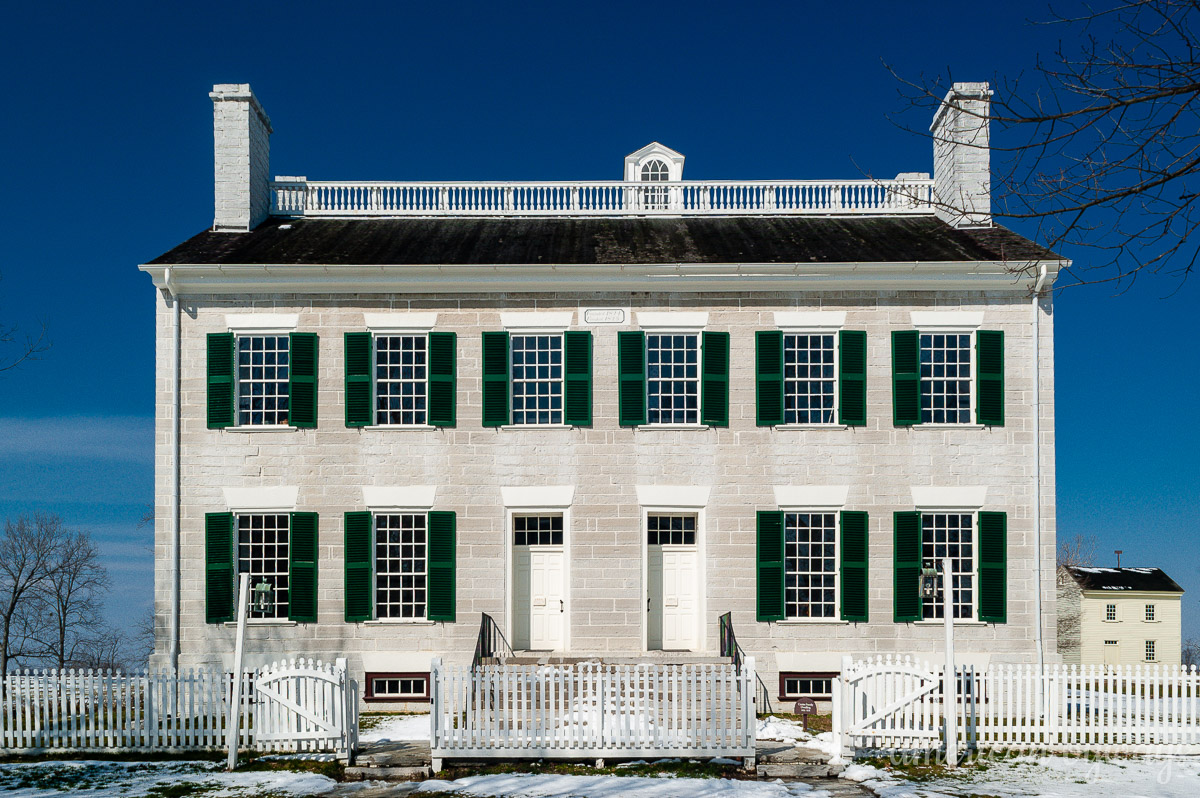