Waterfalls of the Blackwater River Canyon

There are numerous remote, cascading waterfalls along the Blackwater River within the Monongahela National Forest near Hendricks and Davis, West Virginia.

On an expedition of the Canaan Valley and the upper watershed of the Blackwater River in 1852, Philip Pendleton Kennedy wrote in The Blackwater Chronicle: A Narrative of and Expedition into the Land of Canaan, “Perhaps in all this broad land of ours, whose wonders are not yet half-revealed, no scene more beautifully grand ever broke on the eye of poet or painter, historian or forester.”

The Blackwater River and North Fork Blackwater River is still representative of Kennedy’s writings. Owing to a profusion of spruce and hemlock trees along its course, the leaching of tannins from the decaying leaves of vegetation adjoining the stream impart a tea color to the water.

The North Fork passes by the town of Thomas and Douglas which was once the center of a major coal mining and coke production operation by the Davis Coal & Coke Company. While extracting a valuable mineral and providing hundreds of well-paying jobs, it left the stream with very poor water quality because of acid mine drainage. The river that Kennedy once described as so packed with native trout that no baited hook was needed to catch hundreds of fish had become devoid of life.

More recent restoration efforts in the Blackwater River watershed have produced mixed results, reducing acid mine drainage but alkalinity levels remain stubbornly high. As the result, rocks along the stream have been stained a deep orange color, producing vivid contrasts along the river and leaving a lasting reminder of the advancement of environmental protection in the United States.

Despite the environmental issues, the Blackwater River and its tributaries are one of the most photogenic in the state because of its remoteness, its never-ending cascades, and its (mostly) untouched character.

Douglas Falls, a 35-foot-high waterfall, is one of the most interesting because of clear water flowing over contrasting orange-hued boulders surrounded by towering hemlocks and rhododendrons.

Just south of Douglas Falls is the 30-foot-high Kennedy Falls, named for explorer and author Philip Pendleton Kennedy who wrote so eloquently of the area.

The Blackwater Canyon Trail (No. 142), a 12.2-mile single-track trail between Hendricks and Thomas, closely follows the North Fork Blackwater River and Blackwater River. Once the right-of-way of the West Virginia Central & Pittsburgh Railway, it was for years abandoned before being reclaimed by off-trail hikers as essentially a goat path. More recently, the trail was developed with official trailheads and minor improvements to its stability.

Through its meandering path through the North Fork Blackwater River and Blackwater River canyons, it passes by numerous waterfalls and cascades sheltered by towering hemlocks and rhododendrons. 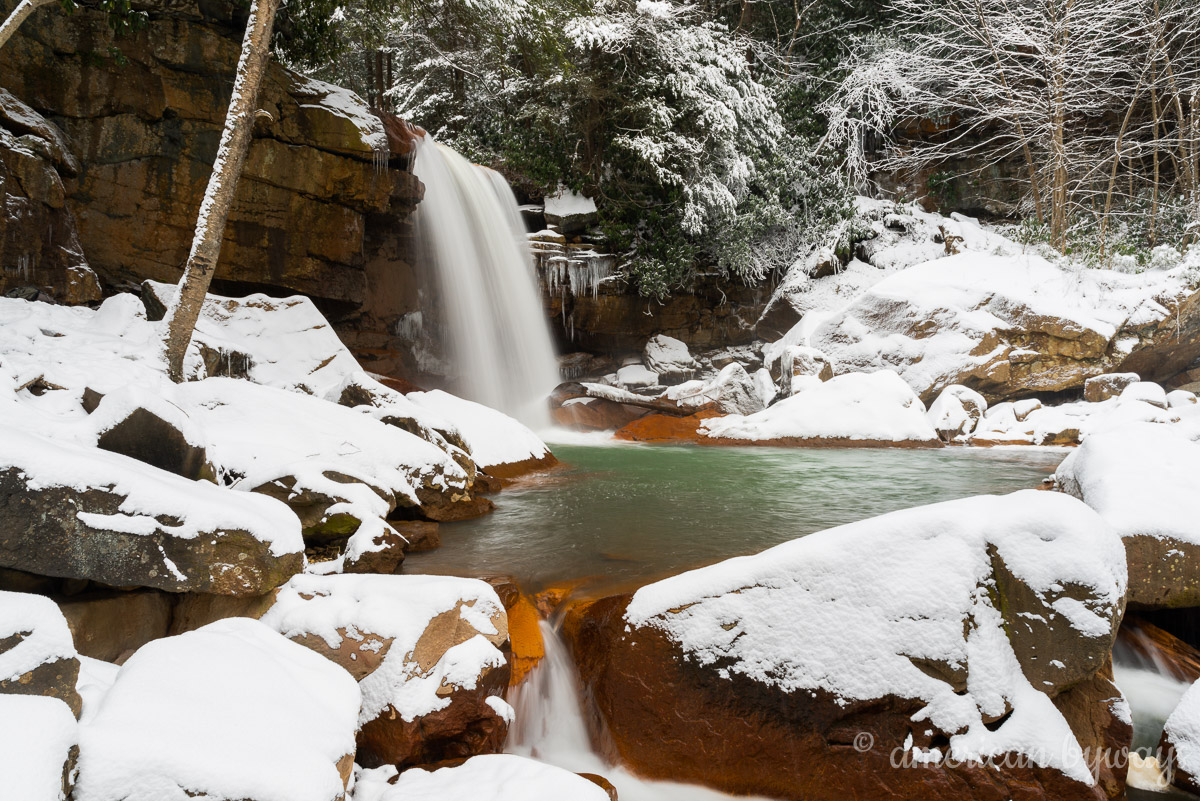