Springtime in the West Virginia Highlands

“Mist to mist drops to drops. For water thou art, and unto water shalt thou return.”

Earlier in the year, I was paid a visit to Holly River State Park for the first time in ten years and captured three of its major waterfalls: Fall Run Falls / Upper Falls, a 20-foot-high plunge waterfall along Fall Run; Lower Falls, a segmented waterfall along the Left Fork of the Holly River featuring drops of 15 feet and 12 feet; and Shupe’s Chute, a 15-foot-high slide waterfall at the terminus of Fall Run at the Left Fork of the Holly River. Although I had above-average flows, the trees were just beginning to bud out because of the higher elevations. A later visit included a covered canopy and mountain laurel blooming alongside Shupe’s Chute.

While there is a boardwalk down to Fall Run Falls, seeing Shupe’s Chute head-on and Lower Falls requires crossing the Left Fork of the Holly River at a long-abandoned ford. During the dryer summer months, water depths typically are ankle-deep. On my two visits, because of proceeding heavy rains, the roaring creeks had come up to my knees and made crossing with camera equipment tricky.

Likewise, it had been a number of years since visiting the Falls of Hills Creek within the Monongahela National Forest. The waterfalls of Hills Creek are worth the trek down a steep trail—which includes laboring up and down 382 steps over 1½-miles to three magnificent waterfalls at 25-feet, 45 feet, and 63-feet in heights. Days of rain had made the water flow bountiful.

Finally, no visit to the area was complete without going down to Blackwater Falls State Park to visit the namesake Blackwater Falls that’s 57 feet in height. It’s where the Blackwater River transforms from a leisurely, winding stream through the Canaan Valley into a rugged whitewater river that courses through Blackwater Canyon. Owing to a profusion of spruce and hemlock trees along its course, the leaching of tannins from the decaying leaves of vegetation adjoining the stream impart a tea color to the water. There is hardly a bad time of the year to pay a visit, although my favorites are after heavy rains and storms that can impart a misty moodiness over the sharp river valley.

It was also a good time to revisit the Falls of Elakala, a series of four waterfalls along Shay Run. There is no defined trail along the stream and visiting these waterfalls require stable footing, mild climbing skills, and bushwhacking.

One of the benefits of exploring in the springtime is the variability of the weather. On one of my visits to Blackwater Falls, an intense rainstorm had passed over Backbone Mountain along US Routes 48 and 219 leading to intense fog formations in the valleys below.

This post highlighting three reserves in the highlands of West Virginia marks the first official Journal entry for the revamped American Byways website. 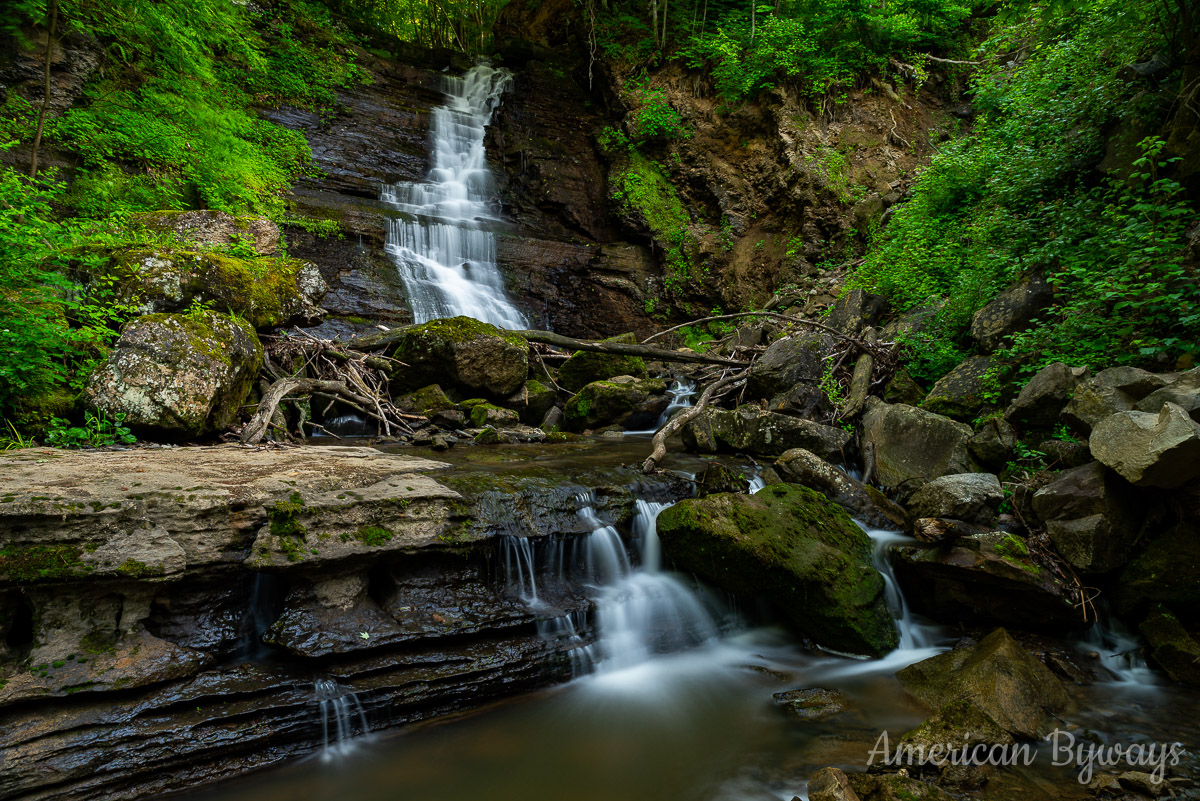